This post contains affiliate links for which I may earn a commission (at no extra cost to you) should you make a purchase. As an Amazon Associate I earn from qualifying purchases. Please see my disclaimer for more information. 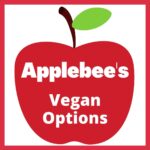 Applebee’s has a decent amount of vegan options for a restaurant that isn’t fully vegan.

They have added an Impossible burger to their menu, and there are adjustments you can make to create a main salad and pasta dish. They also have some bowls and appetizers that you can adjust to be vegan!

Before we get into the vegan options at Applebee’s, keep in mind that cross-contamination with animal products is likely to occur at any restaurant that isn’t fully vegan.

Menu items that contain sugar may also not be vegan by some people’s standards, as sometimes sugar is filtered through bone char.

Here is the vegan disclaimer from Applebee’s:

Also note that ingredients and menu items can change at any time, so double check with your server when ordering.

If you are comfortable with the risks mentioned above, keep reading for all the vegan options at Applebee’s.

As they are, none of the Applebee’s appetizers are vegan, but some can be made vegan with some adjustments.

None of the salads are vegan as they are, but you can make adjustments to the salads below.

Note: Salads are served with a signature Breadstick. Make sure you tell your server that you do not want butter on your Breadstick.

None of the Applebee’s pasta dishes are vegan, but you can make your own dish because they have vegan noodles and the marinara sauce is vegan!

Note: Pastas are served with a signature Breadstick. Make sure you tell your server that you do not want butter on your Breadstick.

As is, the kids menu at Applebee’s does not contain any vegan main meal options. You could as for a kid-sized bowl of noodles and marinara sauce.

The following vegan sides for kids are available:

The following vegan beverages for kids are available:

Juices may contain sugar that is filtered through bone char.

None of the kids Sundaes or Shakes are vegan.

Ask your server if any of the smoothies contain honey and also double check that they don’t contain dairy. Ingredients can change at any time.

The beverages listed above will be considered vegan to plenty of vegans who aren’t super strict. If you are not okay with consuming artificial colors or sugar that may be processed with bone char, stick to drinking water, black coffee, or tea at Applebee’s.

Also confirm with your server that the smoothies do not contain any dairy or honey, as ingredients can change at any time.

The fries at Applebee’s do not contain animal ingredients and they are cooked in vegan oil. However, meat and other menu items that contain animal products are also cooked in the same oil so there is cross-contamination.

Some vegans will be okay with this because cross-contamination will always be a risk at restaurants. But if this is an issue for you, avoid the fries.

Does Applebee’s Have Vegan Pasta?

Applebee’s does not have a vegan pasta dish on their menu, but you can make your own! They do have vegan noodles and the marinara sauce is vegan, so you can order a simple pasta with marinara. Tell your server your don’t want any butter or cheese.

You can even get an Impossible patty with your pasta as a meat substitute.

Make sure you also ask that your breadstick does not have butter on it.

Does Applebee’s Have a Vegan Burger?

Yes! Applebee’s now serves an Impossible Cheeseburger. To make this vegan, simply ask for no cheese.

No. The onion rings at Applebee’s contain milk.

The breadsticks at Applebee’s are brushed with butter, but you can ask your server to omit the butter. For dip you can ask for marinara sauce.

Note that salads and pasta dishes come with a breadstick, so remember to tell your server no butter if you order one of these items.

Does Applebee’s have a vegan soup or sandwich?

No, none of the soups or sandwiches at Applebee’s are vegan.

Does Applebee’s have a vegan dessert?

There are no vegan desserts at Applebee's.

Hey, I'm Bree! I'm a Certified Nutritionist, a vegan, and a whole-food plant-based foodie. I love creating recipes and sharing information related to a vegan lifestyle! Learn more about me →